**Thank you all so much for your love and support, and mostly for your prayers. I feel so blessed to have such wonderful family and friends!**

And now back to our regularly scheduled program...

Last weekend Brent and I trekked back to the Twin Cities for Little David's third birthday party. His birthday had been the week before so he was already used to saying "My free" which translates to "I'm three" in his language. His parents hosted a birthday party for family and a few friends at a local restaurant that had a party room. Here's a look at the festivities: 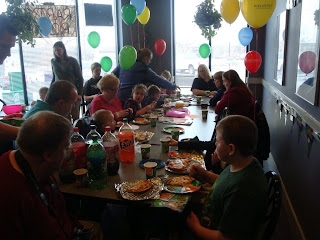 The kids played a round of "Pin the Tail on the Donkey" and as you can see, they missed the mark by just a bit. 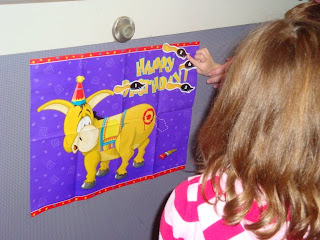 David saw that a couple tails were in the right spot, but he might have missed that there was some peeking going on by a few of the little guests! 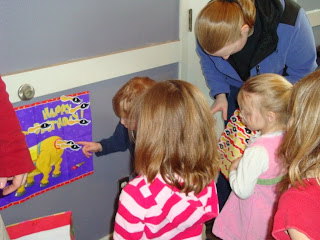 David looking on at the prize won by his little girlfriend. 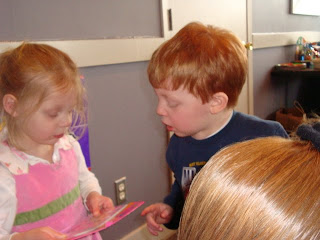 The kiddos got to make their own pizza that was then baked in a kitchen they were able to tour, and the adults enjoyed subs and other goodies. 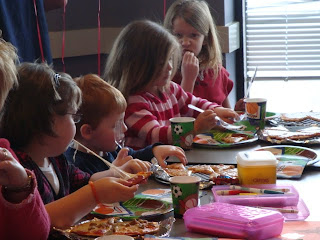 After dinner the kids played a round of "Birthday Bingo". 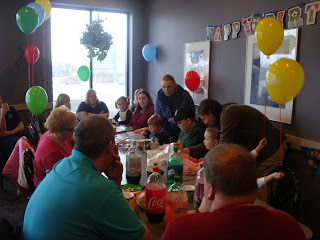 The birthday boy playing his board. 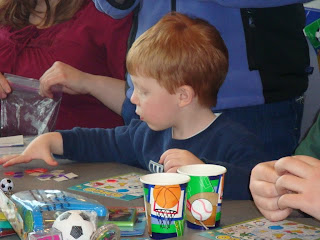 Julie called out the game. 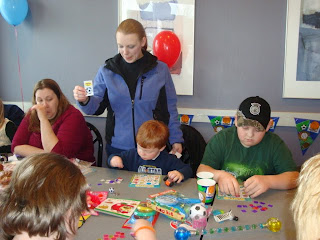 He was intent on playing it right! 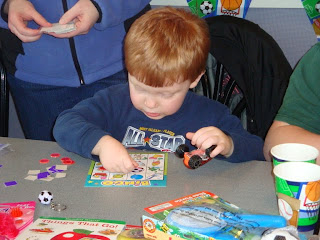 He was also intent on helping put the three candles, and a number 3, on the birthday cake. 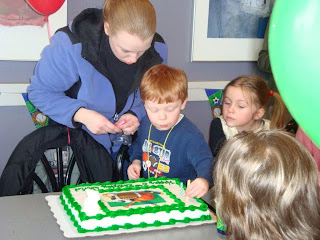 Singing "Happy Birthday" to the kid that got shy with all the attention. 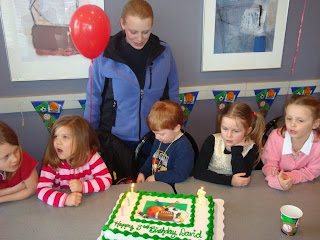 Blowing out the candles. He did pretty well! 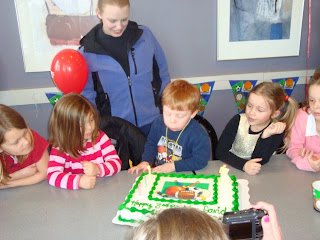 Smiling for the camera... 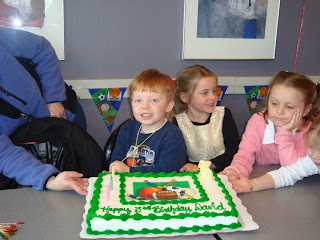 and giving a big cheesy grin when we asked him to keep doing it! 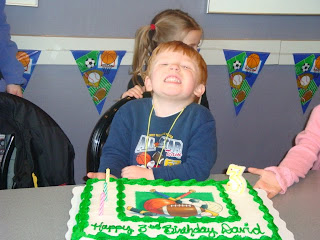 Here he is opening the present from "Tah-wee and Uncle Bent"... 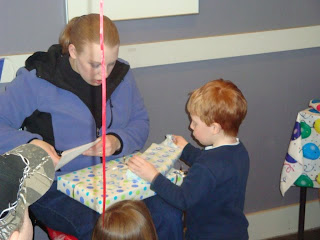 Which came with a musical card that he giggled at. 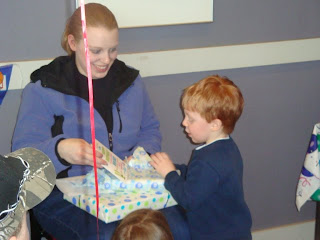 First off, some Matchbox cars. He loves ANYTHING that has wheels and can go fast. We gave him a set of emergency vehicles that had police cars, an ambulance, and a helicopter. He liked it! 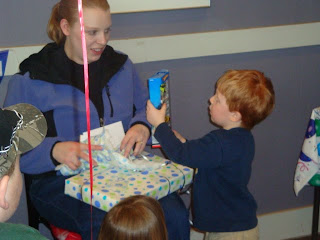 I know this picture is blurry, but I had to include it because the experience was just so funny! He opened the second box from us, which had a few things in it, but the thing on top was this cute shirt. He got this huge grin, made this animated face and looked all excited about it. It was a shirt! This kid has never in his life been excited about clothes before, and it wasn't even a shirt that had a picture on the front. It was a cute shirt that his Auntie Kari thought would look nice for Easter and hopefully last him through the summer. It really isn't something he would normally get excited about. I think he was just so caught up in all the birthday present excitement, that just opening the box cover was going to enlist such a response. It was pretty funny! 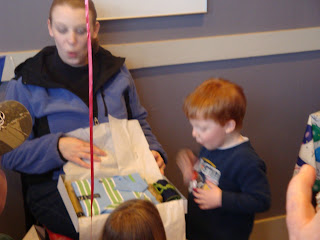 Under the shirt and shorts were some coloring books, 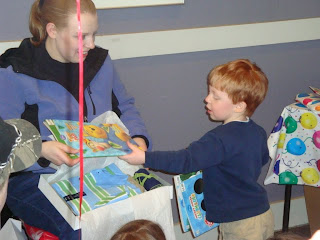 and a "crayon roll" that I picked up at a local craft fair. For all you crafter's out there, click on this picture to enlarge it. It's a great gift idea! Just a couple pieces of fabric stitched so that one crayon would fit in each slot, and I was thinking of it as a great quiet thing for them to bring to church. If I think of it again, I'll take a close-up picture of it next time I see them, so you can see a close-up version of a great idea. 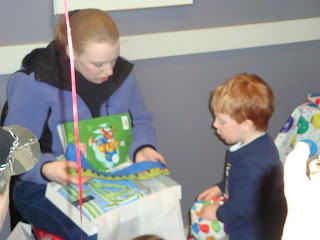 Here's the only picture we could get of David and his little girlfriend from preschool, but by then neither one would pose for a picture. 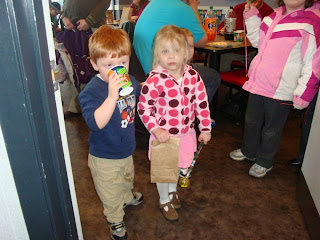 Here's the birthday kid after most people had gone home, showing "Tah-wee and Uncle Brent" how his helicopter works. He liked it. 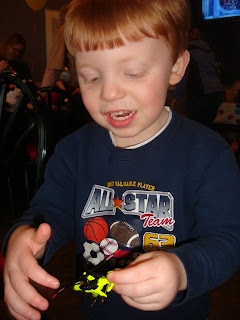 Showing the camera his new toy. 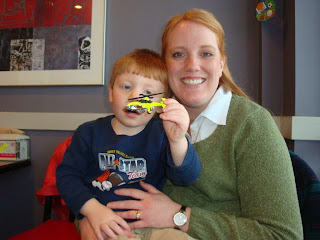 And finally heading home after a fun afternoon with a fun group of people. 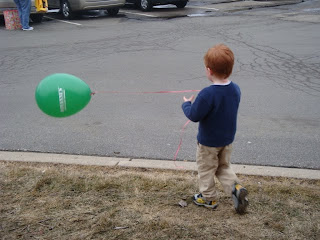 Happy Birthday, Kiddo! We love you!!

Many of you have asked, either here on my blog, on Facebook, or on the phone, where I've been. I haven't always known what to say, or how to answer the question, but I think I'm finally ready to write about it. In fact, I first started this post back in January, but things were changing daily for a while that I could never hit "publish post". Our situation keeps changing, but I decided to just fill you in so I can move forward with blogging, and then I can keep letting you know little bits and pieces here and there.

So where have I been? I'm finding myself on the back side of a severe depression. It's hard to write that, because I've never been here before, but I would say that the week after New Year's is when I finally hit bottom, realized what was going on, and have been working hard to come back up out of the pit of despair.

I won't share all the details, but the quick version is that we've had some of the "normal" first-year-of-marriage difficulties, we've had some that are probably more likely when the bride is older and set in her ways, we've had two lay-offs for Brent in a matter of months, and we've been completely committed to moving, then completely committed to staying here (and both of those decisions have happened a number of times, with action steps taken, then taken back again). There are a hundred pieces of information I could share with you about each of those areas, plus more, but will spare you all the details.

All of this has happened with me having a terrible work schedule. I'm working nights, which is a shift I enjoy, and have been able to handle physically in the past, but right now I'm working random shifts and my body doesn't know what to do. It's literally killing me. I have a heart issue that's gotten much worse, other things are pretty messed up, and I'm beyond exhausted all the time. Sometimes I feel fortunate to sleep for 6 hours or so, but most of the time, I'm taking 1-2 hour naps, or sleeping just 3-4 hours total, spread all throughout a 24 hour day. I've tried a wide variety of things to help this be better, but nothing has seemed to work right. It hasn't been easy, and has led to many of our conversations ending with "I think I'm just too tired to think straight or complete my sentences right now" or has led to me falling asleep at the drop of a hat, at sometimes inopportune times. The bottom line is, this has been an overriding hardship for us.

Finally, the other part to all of this is how I've been feeling about it all. There's the guilt involved with wanting to be the best wife possible and feeling guilty when I feel like I've failed. There's the sadness that all of this has happened during our first year of marriage when I (mistakenly) thought we'd be living in complete bliss. There's the loneliness of missing family and friends and getting my hopes up that we'll be moving back and then trying to be okay with staying.

The good things are: we serve a faithful God, who draws me back to Himself time and time again, and Brent is a rock, who has been very supportive through all my ups and downs. There's the desire to keep it all in perspective when I think of friends or family going through some really hard things. I am not facing cancer treatments, or caring for a child in NICU, or grieving a lost parent or a lost child. I have an amazing husband, a wonderful family, an incredible circle of friends that lift me up in prayer. I know those things are true. Part of the issue is that we've really had more than our fair share of struggles, and part of it is that Satan has dug in to where I seem to be most vulnerable.

So, I haven't been myself lately, and I want to ask your forgiveness for that. If you have called or written and I haven't called or written back, it's not that I haven't wanted to, it's that for the longest time I really just wasn't physically able to. Once that was over, it became my thought that I didn't want to burden anyone with all of this. After all... no one wants to talk to the sad girl. Now that seems to be over and it's just that I haven't caught back up again yet. Please know that I DO want to talk and I DO want to stay connected! In fact, I crave that!!!

I also need to put out a public apology for not having sent out our wedding thank you notes yet. I have no real excuse, except for all of what I just talked about. I'm working on them, and am fully embarrassed that they're not mailed yet. There was the original delay in getting our pictures back, and we used one for a photo card, but now it's just that I want to completely show our appreciation for the generosity people showed to us and I've let that overwhelm me. I promise, though, they will be sent out!

So there you have it... where I've been. Right here in Wisconsin, which is where we'll be calling home. By the way, in case you haven't heard, Brent did get called back to work and while we weren't certain how stable his job would end up being, it seems to be okay for now and we're thankful for that. Now we're working on taking some steps to have my job situation be a little more manageable.

If you've made it this far into my long post, I'd sure appreciate your prayers as I continue to heal. Each day seems to be a little better and I'm grateful for that.
Posted by Kari, RN at 6:00 AM 19 comments: