Father's Day at The Lakehouse

We invited Brent's family to the Lakehouse for Father's Day. They came a bit early so they could enjoy some time on the dock fishing.

Here are the men out helping the kids (Brent's nephew and niece) or throwing in their own lines, while Brent's mom, sister and I spent time on the deck watching them. 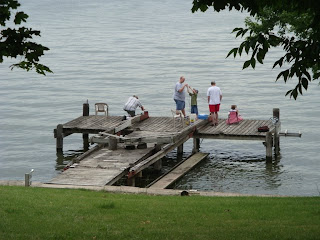 Wade is great about always baiting the hook for the kids. 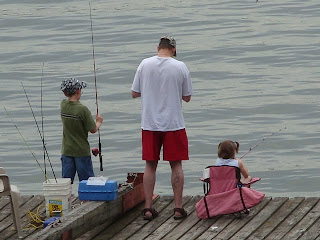 Showing Jericha how to cast. 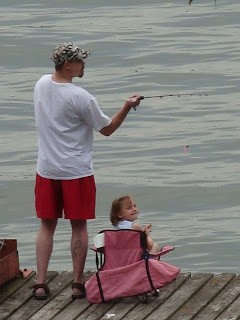 Wade caught himself a Northern Pike that was a pretty good size! He kept it swimming around in the basket for a while, but then let the fish go. That was the first fish caught at the Lakehouse, so I'd say he had a pretty good Father's Day! 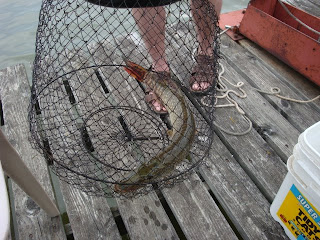 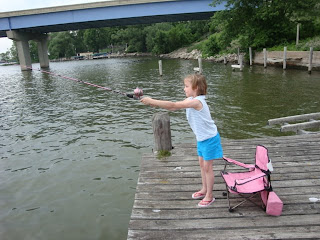 Jeremiah -learning the art of just sitting there, waiting. 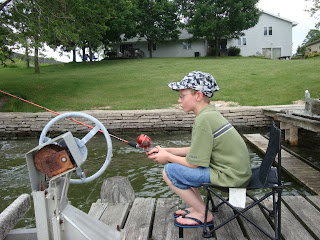 And finally, here you see that Jericha wasn't able to catch any fish, just seaweed. In fact, you can see by the corner post that she was growing a little pile of all the seaweed she kept catching! :) 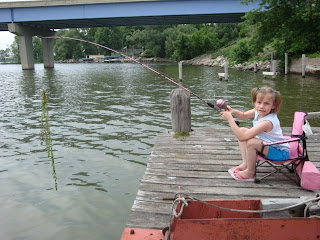 After a good fishing experience, we enjoyed our grilled brats/dogs and a wide assortment of other goodies. I'd say it was a good Father's Day for those involved, and fun to be with family!

I want to be sure to say thanks to my dad for being such an amazing example of what a great husband and father should be. They often say that women marry someone like their dad, and while I didn't go searching that out, it's amazing to see all the great similarities that Brent shares with my dad! ~~ Also, a quick thank you to Randy. Thanks for raising such a wonderful man of God -who turned into exactly the man I needed to marry someday!
Posted by Kari, RN at 4:59 AM 2 comments:

It's hard to have a post and not have a picture of this little guy, so why even bother? 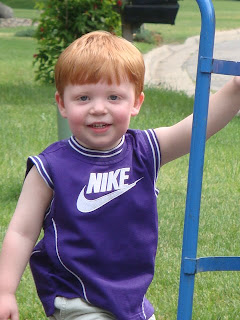 He's was "helping" us on moving day in Burnsville. We seem to be having a LOT of those lately -moving days. But, we're almost done and will be done for a while now! Last weekend I went to Fergus for a bridal shower (that's another post I'm working on) while Brent stayed in the Twin Cities and took charge loading all my stuff that's been in storage for TWO years into a U-Haul truck to move to Wisconsin. I got back just in time to help with one or two things from my parents house, where Little David and his family stopped by. Actually, they came the day before to help Brent and my dad load all the other stuff as well. Somehow my mom and I are the only ones that missed out on the real fun. The truth is, I was pretty insistent that all the loading happen while I could help, not because I wanted to control the situation, but because I felt bad that everyone else would be doing "my" work for me. Seeing as I'm marrying the most wonderful man in the world, he was just as insistent right back that he's now responsible for my stuff and would be just fine even if he had to do it all himself. Because I have a great family, they all pitched in so he didn't have to do it alone. I'm pretty blessed!

This little guy also had fun trying out the "new" trike that Grandma found for him. 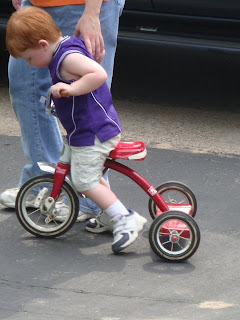 Here's what I saw the whole way back to Appleton. I've been living here since January, but now, finally, all my stuff is here as well! 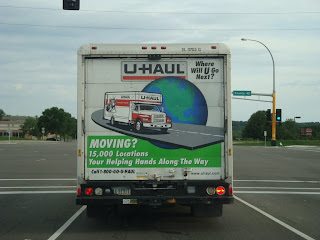 He did such a great job packing that not a single thing shifted during the entire trip back, and I was pretty surprised that ALL my stuff fit into the 17' truck and even had extra space! (I was pretty sure a 24' truck would just barely fit!) 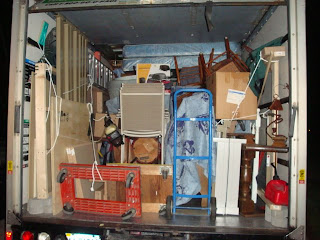 My prince, sitting in our new living room, carefully mapping out how the new shelves we bought would fit against a certain wall. I'm happy to say I don't have to live in all those boxes anymore! We've done a good job of unpacking some or moving others to the basement for now. 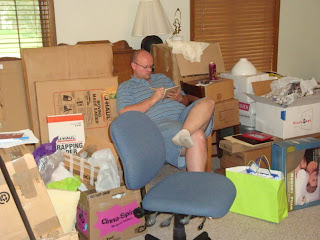 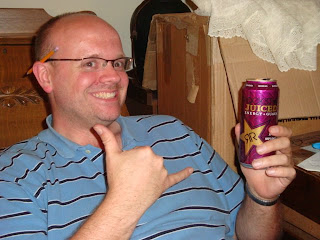 I am so excited that in 18 days he'll be mine forever! I'm looking forward to so many things about being married, but lately it's that I can hardly wait to LIVE in the same place finally! He won't have to come visit me in the Lakehouse, but he can be here all the time! Only 18 more days to go!
Posted by Kari, RN at 5:37 AM 6 comments: 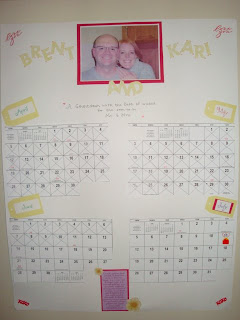 We're really only a month away now! Yippee!!!!!! I have loved this engagement stage, and all the wedding planning, dreaming, and fun stuff that's gone along with it, but I am so ready for this next month to go by quickly!

If anyone in Fergus is able to save me a copy or two of last Saturday's Lifestyle section from The Daily Journal, that would be lovely! It's not online yet, and I've been excited to see it!
Posted by Kari, RN at 7:59 AM No comments:

It's a lazy Saturday here in Appleton! I worked last night, slept part of today, waited for the INTERNET GUY to come and install the beloved internet, and have been doing stuff online since then! Brent's out of town for the weekend at a friend's place near Madison, doing a whole boardgame tournament weekend. I guess he won last night during his first game ever of Settler's of Cataan, but today lost during some six-hour battleship-type boardgame. He was between games earlier when he called and was looking forward to whatever was next. It'll be fun to hear him recap the weekend when he gets back tomorrow, and I think this was a nice way for him to unwind after his last week of school with the students -he just goes back for a couple days next week to wrap things up. Then I get to enjoy the benefits of him working for a school district = summer's off!!! :)

So, I'm here at The Lakehouse, watching the rain outside, listening to The Sound of Music on the TV in the background (not one of Brent's favorites, but definitely one of mine!) and taking the time to upload some pictures to Facebook and updating this blog! I'm so excited to have internet again, and while these next 34 days will continue to be busy leading up to the wedding, I'm looking forward to life settling into more of a routine, including blogging more regularly again!

Last Saturday I had the enjoyment of attending my first Bridal Shower! The ladies from Ebenezer Church, plus my maid of honor, Aimee, threw a lovely bridal shower for me. I felt so incredibly blessed! My mom and sister were, of course, at the shower as well so here you see Julie and I enjoyed the delicious food that was prepared. 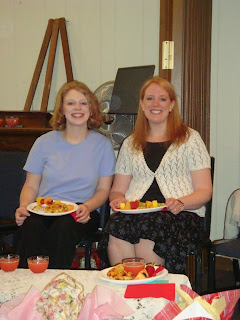 These lovely ladies have known me my whole life and blessed me with organizing all this (plus one more who had a work conflict). Joan, the second from the left, said "you're just like one of our own daughters" when she called me about the shower. THANK YOU, THANK YOU for all the work you put into this wonderful shower! 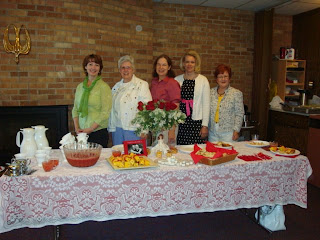 I had a cousin who was able to come and luckily she was willing to snap a few pictures for me! 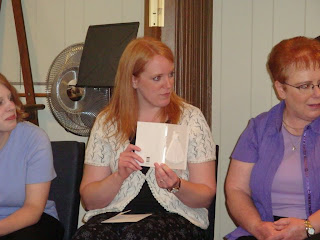 Here are some of the ladies who attended the shower. Many of these women were friends with my Grandma, and just like the baby shower held for Julie when David was born, I became overwhelmed thinking about how wonderful it would've been to have her there. We were in the Fireside Room at church, the very place where I sat each Sunday after church with my Grandma, drinking water out of a coffee cup, listening to her talk to these friends, sharing stories with them. I miss her and wish she could be a part of all this celebrating! (It would be her birthday tomorrow, June 7th.) 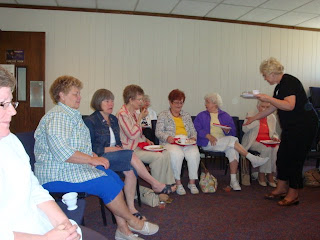 My mom gave Brent and I a Christmas Book, one where we can write about our celebration each year, which becomes a fun way to recap the year. I love looking through my mom's version of this same book. 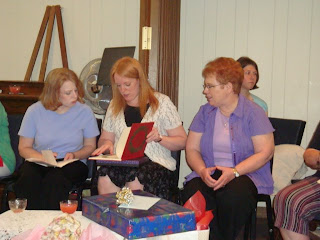 Enjoying the coffee and fellowship! 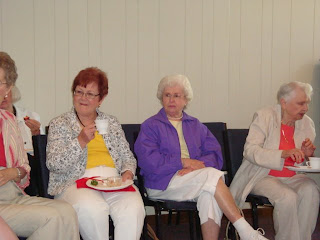 It was fun to start getting some of the things we've registered for, including these great library versions of classic board games. Brent the Librarian loves the look of these, and we both love playing board games! 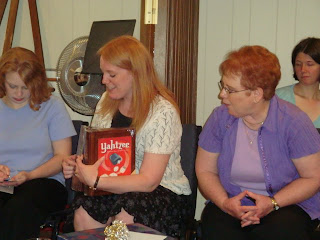 Passing around the gifts for all to see. 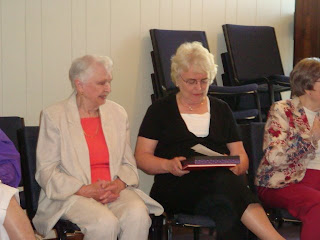 Fun to have "help" from little friends! 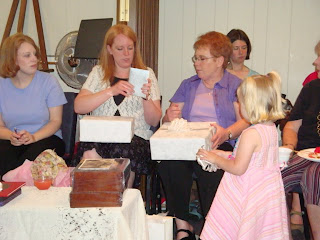 Then, later in the day on Saturday, Brent and I were both invited over to have dinner at David and Julie's place. It was fun to relax with them, have Julie try on her bridesmaid's dress for me, but mostly to play with this little guy! I just LOVE this face!! 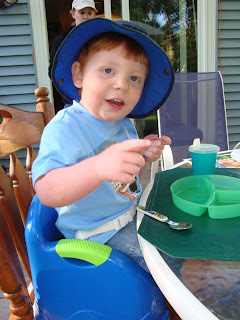 He's such a goof-ball -always up to something. Or at least, he always looks like it! 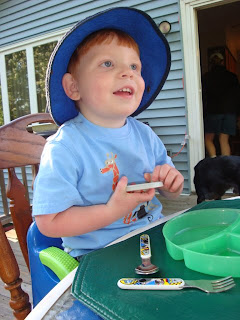 Part of dinner was some pasta with alfredo sauce, and it was HILARIOUS to watch him eat this! The best picture is on Brent's phone, where the pasta is hanging from his mouth down to his shirt! Then, it was so great to watch him slurp it up, and push the last little bit into his mouth with his hands. 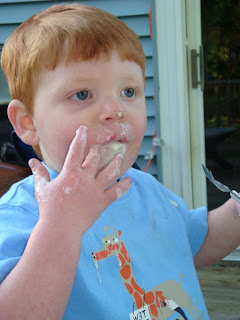 He was pretty proud of himself, and only maybe slightly realized how much we were all laughing at him! 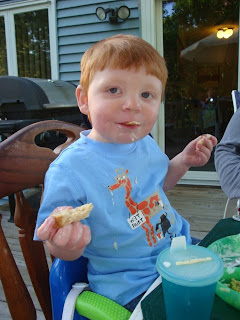 It was a wonderful weekend back in the Twin Cities! Thanks again for the shower, the dinner, and the relaxing time together!!

This coming Saturday, June 13th, will be another shower, back in Fergus Falls. Some wonderful friends there are throwing that for me and I'm so looking forward to it! It will be an open house from 3:00-5:30pm with a short program at 4pm, and will be held down at the LB Seminary building. I am so looking forward to being back in Fergus, seeing all of you friends there, and I know there might even be some "extra" people in town for the CLBA annual convention. If you're one of those people, I'd love to see you as well! Come on down!