I know I promised The Story of our engagement, so I want to honor that promise! It's been a busy couple of weeks with initial wedding planning, planning a move to Appleton, finding an apartment, job hunting, Christmas with two families, and my favorite thing of all... spending time with Brent! I've been driving back and forth every couple of days, so I've literally been living out of my suitcase these last few weeks, and am excited to finally get to Appleton and figure out a more normal routine! It was fun to log onto Facebook today and have a couple of friends chat with me immediately saying they've missed me! Thanks for your patience with me, and please know that I've missed you too!

Back to the original story of our engagement... it's pretty sweet! With my work schedule in Mankato, I end up with one week a month where I have almost a week off. So, Brent had come over to Minneapolis for the weekend so that we could go to the Michael W. Smith Christmas concert together with my parents, but after that we headed back to Appleton since I was off for the week.

He took Tuesday off of work since I was going to be in town, so I started suspecting our engagement might happen on that day. But, I was really trying to work hard at not thinking about is so that it could be a surprise! In fact, when Brent once asked if I had ever thought about how I might be proposed to, I said that I had no specific thoughts about it, but that I hoped it would be a surprise!

So, that Monday I had spent the day doing some shopping with Brent's mom while he was at school. When he got home, I had gotten a little something for him since it was our dating anniversary. It turns out he had done the same for me, and when he said "don't come in here just yet, I'm getting something ready for you", I wondered if it might be an engagement ring! It turns out it wasn't, and I immediately thought "well that's okay, because it'll probably happen tomorrow, and if that's not the case, Christmas is just a short time away!"

So, after we exchanged gifts, he said that he was going to make a cup of tea and asked if I wanted one as well. Since we're both big tea drinkers, it was a pretty normal question. He went to the kitchen to get things ready, and I followed him after a few minutes.

I walked over to the mug and picked up the tea bag string to swish it around and make sure the tea was steeped long enough. I looked down and was completely surprised to see a beautiful engagement ring strung on the tea bag!! I guess I even had the look of complete surprise!

Brent then got down on one knee, said some wonderful things, and asked me to marry him. I said "of course I will!" and he put the ring on my finger!

We were able to call my parents (who already knew it was coming since he had asked for their blessing) and my sister, and then went out for a celebration dinner at The Melting Pot, a new favorite restaurant. Seriously. If you haven't ever been there, check it out!!

It was so fun to be able to spend Tuesday, his day off, doing a bunch of random things around town with him, and also make a few key calls. It turned out to be a snow day in the area, so it was pretty fun trekking through huge snow piles in my 4-wheel drive!

So, that's the fun engagement story! It was so special to hear Brent describe to someone "well she always plays with the string of the tea bag so I knew that would work" and so special to be completely surprised by something I was completely expecting. He couldn't have pulled it off any better!

Now for the other updates.... I head back for my last two shifts of work in Mankato tomorrow and Thursday nights, and then I'll get all packed up on Friday. Brent will meet me there and we'll head to my parents so that I can get stuff from Burnsville, and then on Saturday morning Brent and I, along with my parents and their truck, will move me to Appleton! I am SOOOOOOOOOOO excited to finally live here!! We've been so fortunate to get to spend so many weekends together, but the drive is getting pretty old!

I have an apartment all lined up and then the good news is that I have two job interviews for Tuesday! There are three hospitals in the area, so I have an interview with two of them, run by the same organization, on Tuesday morning, and the other one in the afternoon! Please pray for me that I'll make the right decision for which specific job I should take -unit, salary, shifts, etc... all come into play with that decision. I'm so thankful that there are some options.

I really plan on spending a little more time online once I have internet access at my new place, so I'm hoping to do a better job of updating soon! I have great pictures from that concert, Christmas, etc, so I'll share soon!
Posted by Kari, RN at 4:20 PM 11 comments: 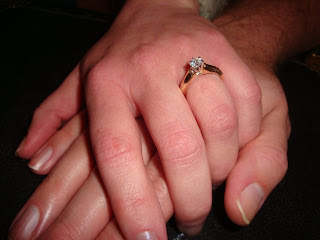 [Side note: This is going to be an abbreviated version of the final post. I am struggling with not having enough time to finish all of what I want to accomplish -I know, we all struggle with that! So, because of all the requests for pictures, I'm going to just publish the post I've been working on, and then I promise to come back in and add in all the fun details! Thanks for your patience! :) ]

Thanks for all the fun well-wishes so far! Someone asked if my feet have touched the ground yet, and the truth is -NO! :) I feel like I'm flying high and I'm not sure when I'll land! I've been OVERWHELMED at all the amazing words of encouragement and congratulations here, on Facebook, and by phone. I got tears in my eyes realizing how loved and cared for I am by all of you. THANK YOU!!!!!!

Here are some fun pictures Brent and I have taken in the last couple of days. The first picture we took after our engagement is a little too dark without a flash, and a huge disappointment for me is that I didn't even think of taking a picture during the incredible celebration dinner we had at The Melting Pot that evening. So, here's a picture from Tuesday using Brent's tripod and my camera timer... 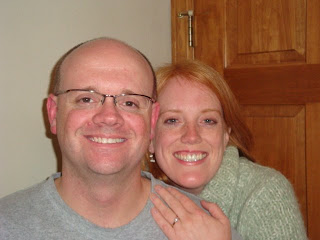 A picture so you can see what the ring looks like... 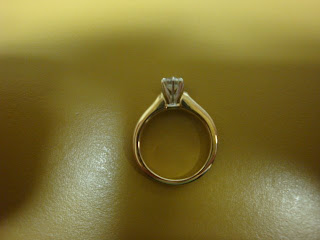 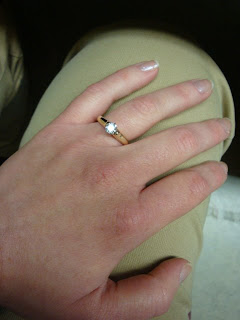 And me being a big ol' dork in Brent's office at school on Wednesday, using the timer to see what everyone else sees when they look at me now! :) 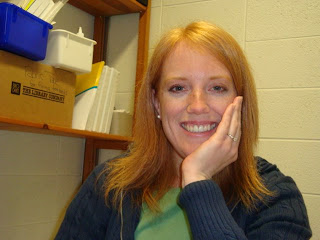 [okay, more details and stories to come later! I've been trying to get a few small things pulled together for our wedding, but I also have to head back to Mankato today to work 6 out of the next 7 days in 12-hour shifts, and need to work on job hunting in Appleton. PLEASE PRAY for me with this! I'd love a travel job since my apartment and paperwork is all taken care of by someone else, but if that doesn't happen in the next 1-2 weeks, I'll look for a permanent job. Please pray that just the right thing will work out!]
Posted by Kari, RN at 12:35 PM 19 comments:

And we're gonna get married!

YES! You read that right! I am so thrilled to announce that on Monday night Brent asked me to marry him, and of course, I SAID YES!

I'm in Appleton with him right now, and today am hanging out at school with him (the principal invited me!) so I promise to post pictures later, but wanted to at least let you know about this super fun news!

He had taken the day off from work yesterday, so we were able to finish up our Christmas shopping and also made a bunch of phone calls. We'll obviously have a lot of other details to work on, but can at least let you know that the wedding will be July 11th at Bethel in Fergus. Save the date!

I am so excited to marry this amazing man, and am really looking forward to becoming his wife. God has absolutely brought the two of us together and fashioned us for one another. What an amazing blessing!!

I know, I know.... I usually wait until I move to a new location to change the look of my blog. But, it's gotten REALLY cold here in Mankato, there's snow all around, and I have to scrape my windows each morning. So, I realized that winter hit and it was time to get rid of fall colors and move on to the cool ones. I mean "cold" ones.
Posted by Kari, RN at 4:29 AM 4 comments: