Happy Thanksgiving! I hope that you each had a wonderful Thanksgiving holiday! This post will show you some pictures about our weekend, but first a few housekeeping things:

2. I've had problems getting online with my phone. This means I can sometimes see Facebook, or even blogs, but have had a real hard time uploading any messages or commenting on other people's posts.

3. My computer has been giving me more and more problems even getting started up, until finally Brent just cleared it out and started over from scratch. It's been a big, long, ongoing hassle.

4. I love my new job. I really like my co-workers, my patients, what I actually do, and of course, THE HOURS! I feel normal again -at least as normal as I'll ever be! :)

5. Brent's been back at the appraisal firm and things seem fairly stable.

6. We've gotten much more involved at church and it's been a great way to make friends and have Appleton start to feel like home.

7. I have lots of pictures of all the things we've been doing since (gasp!) my last post in July, but being the chronological person I am, I haven't wanted to go out of order. I finally gave up so I could at least get something online, and I have high hopes for back-tracking. Someday.

Okay, onto Thanksgiving! In fact, it turns out, this should just be labeled "Entertainment by David". I guess I didn't take a single picture of anything having to do with Thanksgiving!

We went to the Twin Cities during a snow/sleet/rainfall that made our trip an hour and a half longer than normal. We had Thanksgiving dinner with my family on Thursday, and I'm sure my mom will post a picture of that someday. Afterwards, they had agreed to watch David for my sister and brother-in-law so he entertained us for the rest of the night. Here is is with his favorite truck, carting around his other toys to make a "pile of junk" as he called it. 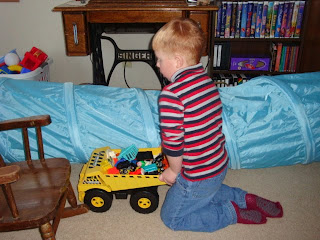 Getting out the Lego blocks, which helped us build a BIG tower. 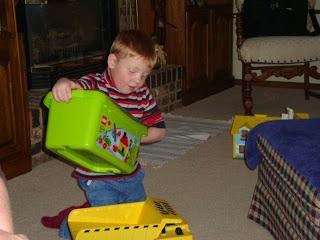 My mom serenaded us throughout the afternoon. 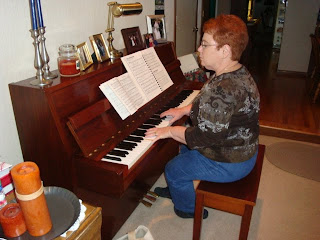 Brent sat back, watched some football, and probably thought to himself "what did I get myself into marrying into this family?" Actually, he fits right in. 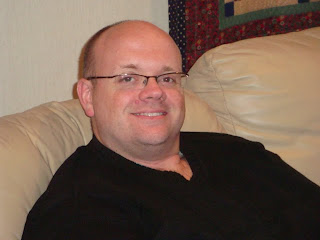 We tried to take a Christmas picture, so here is just one of the many to choose from. I don't know if we'll get around to it or not, but I guess you'll have to watch your mailboxes to see! If we don't mail them out, I'll post the ones I liked even better. 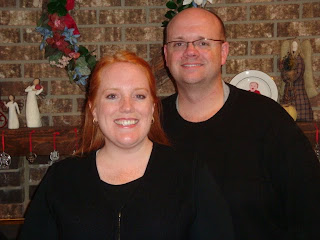 The funny part was, that this little guy REALLY insisted on being included in the picture. It's interesting how sometimes he'll ignore the camera or look away, and other times he gets super goofy. This was a goofy moment! 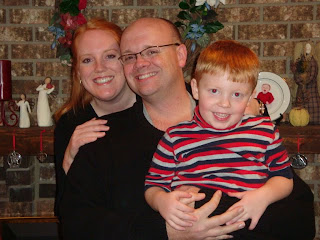 At least Uncle Brent goes right along with the goofy-ness. 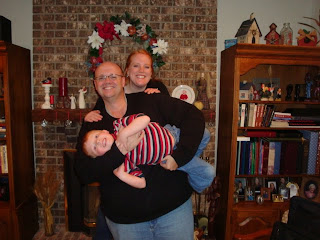 I sure love these two and their big grins! 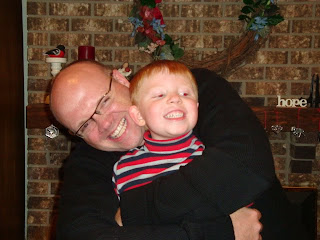 Early in the evening, he decided to play "bedtime" and brought a big blanket over and some books and put himself to bed on the couch. 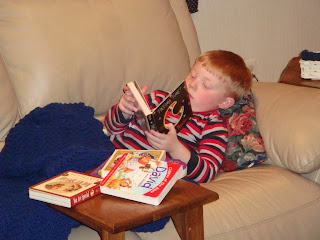 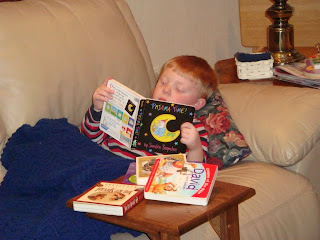 Grandpa decided to join in on taking a little nap. I guess the only floor space to be found was in a tube. Hmmm..... 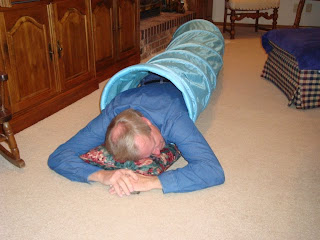 David decided to join Grandpa, and climbed right up. 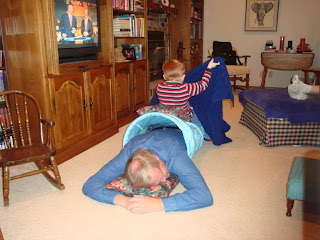 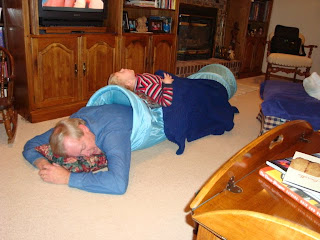 I guess something on the TV caught his attention so he sat right up and stayed awhile. 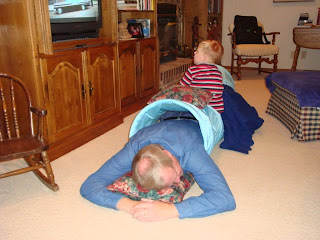 Then, he got really silly and climbed through the tube to try and join Grandpa on the inside. He got a little stuck at the point you see in the picture and of course by now we were all laughing pretty hard! 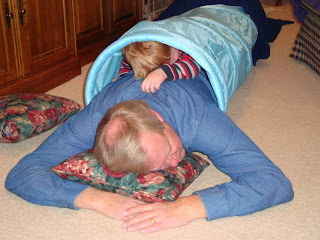 After the "tube incident" we decided to build a fort. He was pretty proud of it and made a doorway so I could come in and join him. We read books by flashlight and told stories. It was fun! Don't you just love that goofy grin, too?! (I also have to add the side note that I can't look at that plaid wool blanket and not think of my Grandma. It was hers, I miss her daily, and am reminded of her often with little things like this.) 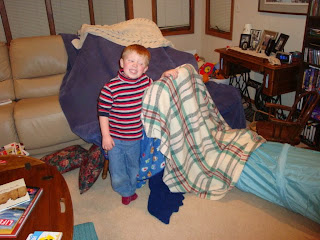 The next morning, Brent and I did some Black Friday shopping (and found some great deals on things we've been planning on for a while!), then we drove back home during some great weather. On Saturday Brent went hunting with his dad, uncle, and brother-in-law while I stayed home to work on dinner. We had invited his family over for Thanksgiving Dinner Round Two, but after the guys decided to go hunting all day I decided to just think of it as an "Andrews Family Dinner" so it would feel less stressful doing it all alone. It helped! Brent's mom and sister did bring a few things, so that sure helped too. It turns out I didn't take a single picture from our time with them so you'll just have to imagine our fun together.

Today we were able to have a fun afternoon with friends! Stan and Cheryl were in town visiting and it was SO MUCH FUN to reconnect! We go way back, with connections left and right through family, Bethel, and CLBA activities. I'm friends with each of their kids as well so it was fun to hear updates about each of them! 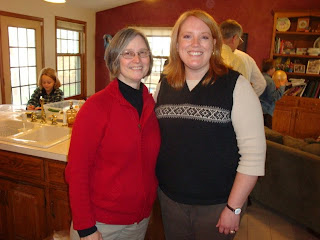 Well, there you have it! A little update on us, and a view of our weekend. Like I said, I'm hoping to backtrack on older pictures, but I guess I should learn not to make promises, and just surprise any of you that might still check this blog! :)